A message to the fans, published this week by Blackburn Rovers has been welcomed by the club’s official supporters trust.

The Rovers Trust said this first open communication in several years was an important step forward in engaging openly and honestly with the fan-base.

It follows a series of meetings and communications between the Rovers Trust and directors of Blackburn Rovers that took place in the latter half of the season just ended.

The Rovers Trust has offered to work closely with the club to help rebuild trust amongst supporters, help bring back fans to Ewood Park and act as a conduit through which the owners could engage with supporters in a meaningful and respectful way. 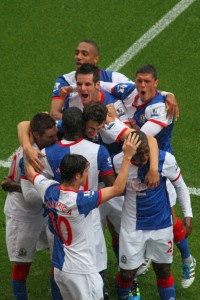 The owners are now being urged to quickly follow up this positive communication by meeting with the Rovers Trust to discuss how it can help the club move forward and bring back the disaffected fans.

And the trust warned the club its latest initiative was in danger of being interpreted as a PR stunt by angry and distrustful fans who feel they have been largely ignored by the hierarchy at Ewood Park.

In their message to fans, the owners admit to learning “some very valuable and costly lessons”, but thank the fans for their support and say the management teams on and off the pitch have their backing and they continue to commit to the club for the next season.

However, the statement is short on actual detail of how success will be achieved (other than supporting Gary Bowyer while struggling to comply with Financial Fair Play) and says nothing about how the club can repair its relationship with large sections of the fan-base.

Wayne Wild, co-chair of the Rovers Trust, says: “We have met the top team and we have drawn up detailed plans and ideas to reconnect with Rovers fans everywhere.

“These were received positively and we asked that they were passed on to the owners for their consideration and a meeting set up with the owners to discuss how the official supporters trust can work with the management team day-to-day to rebuild trust in the club.

“Now this statement has been published in an attempt to draw a line in the sand and start afresh, the club must be hoping the majority of supporters will forgive and forget past mistakes.

“The reaction on fans’ message boards and in the media tells the owners there is a long way still to go to win back trust.

“We can help them in this and, as we have been saying for three years now, all we ask is a meeting to discuss all the issues that concern supporters about their ownership of our club.

“The worst thing now would be that their open letter to fans is dismissed as simply an attempt to placate fans at a time when season tickets need to be sold.

“They have to build on the positivity this communication brings and really engage with us on a meaningful level.”

Wayne added: “The Rovers Trust remains the one clear way they can do this.

“We are the only officially recognised supporters trust for Blackburn Rovers with more than 1,000 paying members who look to us to try everything we can to set up clear honest lines of communication between the owners and the supporters.”

The Rovers Trust was set up in 2012 to give fans a voice in the face of increasing uncertainty and chaos at Ewood Park caused by the change of ownership from the Walker Trust to the Desai and Rao family.

The Rovers Trust exists to safeguard the long-term future of Blackburn Rovers and its assets on behalf of fellow supporters and is committed to acquiring a stake in the club at any opportunity.

The not-for-profit organisation is one of the UK’s largest supporters trusts and is backed by many of East Lancashire’s biggest and most prominent companies.

The trust is working on a number of community and grass roots football initiatives in and around Blackburn as part of its charitable ethos.

Last year, the trust was also instrumental in ensuring that Ewood Park was protected by law as an asset of community value.

The Rovers Trust is on record as seeking a meeting with the owners of Blackburn Rovers any time and place to discuss ways of helping them reconnect with supporters and rebuild lost commercial revenues.