Due to a cruciate knee ligament injury sustained before the start of the season, Best has yet to feature for Rovers but everyone at Rovers Trust would like to wish Leon a speedy recovery and hope he steps out onto the Ewood Park turf soon.

The Irish international striker began his career at Southampton, before enjoying successful spells at both Coventry and Newcastle, including a hat-trick in the Magpies’ 5-0 win over West Ham United in January 2011. 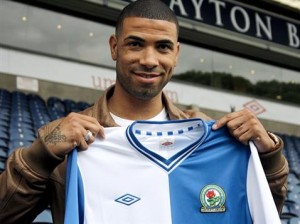 Best put pen to paper on a four-year contract at Ewood Park in July and new manager Henning Berg will hope the striker can get back to full fitness and help fire Rovers back into the Premier League.

The sponsorship deal will first feature on the big screen at Ewood Park tonight at the Lancashire derby with Bolton Wanderers.

Rovers Trust is always on the look out for ways to support the club and, in the autumn held its first Sporting Dinner at Ewood Park. This is the Trust’s first official commercial partnership with Blackburn Rovers and is a clear sign of the willingness of both parties to work together.

Brian Lamb, corporate officer for Rovers Trust, said: “The deal is a positive one for Rovers Trust as it allows us to gain increased exposure across a number of media platforms and get the Rovers Trust logo out to thousands of supporters.

“Sponsoring Leon ensures that Rovers Trust has season-long exposure to Rovers fans both through print and digital formats and, as part of the package, we can now run some superb competition prizes for our members including match tickets, lounge passes and a signed shirt and football.

“We feel this is an excellent way of reaching out to Rovers fans and also cements our values whereby we support the club and the players for the good of Blackburn Rovers Football Club.”

The sponsorship of Leon confirms Rovers Trust’s long-term commitment to Blackburn Rovers Football Club and shows how important it is for the Trust to get behind the club in order for it to progress.

Rovers Trust held its official launch at Blackburn Cathedral on Saturday November 24 and is now busy signing up members to the Trust to give voice to all Rovers fans.

To become a member of Rovers Trust, please sign up here