Howard Gayle: “Blackburn Rovers and my best ever football season – 1988/89” 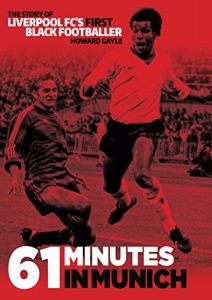 The first black footballer to play for Blackburn Rovers (and Liverpool) may not be how Howard Gayle wishes his playing career to be remembered.

The explosive, muscular wing-play, important goals, his rapport with team-mates, in particular strike partner Simon Garner, and above all perhaps his folk hero status on the terraces; all these would be plenty enough to guarantee Gayle a place in the Rovers fans’ pantheon of past players.

But Gayle, born in Toxteth in Liverpool in May 1958, was playing at exactly the time of the 1970s and 1980s when racism was rife in English football grounds and black footballers – Cyril Regis, Laurie Cunningham, John Barnes and others – were both the target of moronic abuse (and worse) and, conversely, the inspiration for anti-racism sentiment to get behind.

That he enjoyed by far his most productive and sustained spell of his entire career on the Ewood Park pitch is something Rovers fans are grateful for.

We witnessed the slow change of expression from the mindless joining in of racist chants by the majority, to the slow dawning of the hypocrisy and sheer stupidity of calling names at a man simply for the colour of his skin. That we now had a black player in our own team – and a hero to boot – was the ‘switch’ for many fans to turn off the abuse towards others.

Gayle has written his autobiography about growing up in Liverpool, signing for the club he supported (we all wanted to do that!), but having to cope with being rejected by the Anfield club and struggling to make an impact at a succession of lesser clubs.

Decent spells at Birmingham City and Sunderland (48 appearances for each) were not enough to dispel the impression he had become a journeyman footballer.

He badly needed some love and it came, in 1986, in the unlikely (for him) and, being honest, a little desperate, move to Ewood Park.

He was wary because of Blackburn’s reputation as a National Front town and problems with racism on the terraces, he writes. But, Don Mackay gave him a chance as one of a few signings of players “that maybe had lost their way.”

He joined Garner, of course, and Scott Sellars, Ossie Ardilles, Frank Stapleton, Colin Hendry and Kevin Moran and Gordon Cowans. Terry Gennoe in goal – what a team! The 1988/89 season was Gayle’s best as a professional footballer, he says. Rovers fans would certainly agree. “I was at my happiest alongside Simon Garner.”

In 45 games Gayle and 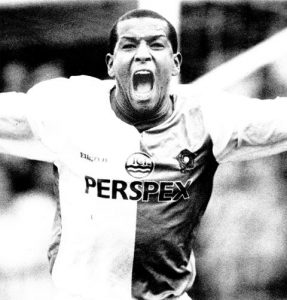 The two to three seasons under Don Mackay and in which Gayle played such an important role are remembered with great fondness by Rovers fans who were there. The club didn’t have a pot too piss in, the Ewood Park ground was worn, but loved.

Indeed, Simon Inglis’ seminal Football Grounds of Great Britain was first published in 1987 describing approvingly the tramlines in Kidder Street outside the Blackburn End – the first cantilever end-terrace roof in the world which created such a fantastic atmosphere on match days.

Inglis’ book presaged a new era in football – a post-punk sensibility amongst fans sick of hooliganism and racism, brought up on Two Tone records and Rock Against Racism gigs and marches. When Saturday Comes and, in Blackburn, 4,000 Holes fanzine, the footy equivalent of the town’s much-loved Dead Good.

We had a team that was fit to play in Division 1. Three successive play-off failures couldn’t dent the feeling of optimism and fun. We also had a team that played bloody great football with proper flying, cultured wingers, a legend of a goal machine in Simon Garner and a succession of brilliant keepers.

Winning the Full Members Cup with 30,000 at Wembley in 1987 was a real highlight. The fusion of full terraces and a real sense there were hearts and minds to be won over, fighting against racism with the help of a player as good as Howard Gayle, these were just as important battles as leagues and cups.

But the bubble burst at Selhurst Park one crushing June afternoon, the dream died, Gayle never played as well again and moved on when Jack Walker took control and brought in Kenny Dalglish to ensure Blackburn Rovers went on to bigger and better things, culminating in winning the Premier League in 1995.

In January 2009, in the Lancashire Telegraph, Gayle described his spell at Ewood Park, between 1987-92, as one of the best of his career.

He admitted a sense of wariness over the move, especially after a horrific taste of football in the North West a few years earlier while at Birmingham City.

“It was a concern before Don Mackay signed me,” he said. “The region was historically known for its nationalist roots and having played in a friendly at Burnley before, I knew how bad it could be.

“The abuse I got that day was terrible.

“The Rovers fans were brilliant to me though. I scored lots of goals with Simon Garner and we almost got them to the first division.”

Howard Gayle will be joined by Simon Garner at AFC Darwen at 7pm on Saturday January 21, 2017, for an evening reminiscing about their playing days in the halcyon late 1980s at Blackburn Rovers.