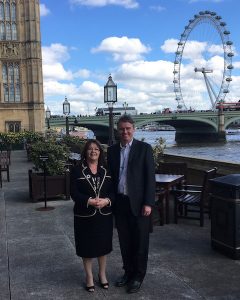 Top level meetings between the Rovers Trust and the Sports Minister to discuss the ongoing crisis at Blackburn Rovers will continue after both the end of season and the General Election, we can report today.

The Trust’s Michael Doherty has held initial talks with Tracey Crouch MP, the Minister for Sport, on behalf of the Rovers Trust members, and briefed her that one of her key football governance reforms was not being met by the Ewood Park club.

The meeting took place against a backdrop of Blackburn Rovers locked into a desperate ‘last game of the season’ fight for Championship survival and the MP for Chatham and Aylesford fighting for re-election and bidding to continue her role as Sports Minister after the election.

Michael reports: “First, I was able to give the Minister a brief update on the ownership situation at Blackburn Rovers and the six-year spiral of decline under owners who have no engagement with supporters, or seemingly any plan for success or sustainability.

“Second, I focussed on the reforms from the Expert Working Group on Football Supporter Ownership and Engagement that reported in January 2016.

“This was a group set up by Tracey Crouch and the report was endorsed by her.

“She had been briefed that Rovers was compliant with the new rules on the biannual Structured Dialogue meetings.

“So she took great interest in my feedback that, in the absence of a CEO, COO or Managing Director; the continued absence of the owners’ direct representative in the UK (and uncertainty as to his name and employment status) and the refusal of the owners themselves to engage with the process then the aims of her reform were not being met.”

The Structured Dialogue meetings are intended to allow supporters to hold senior personnel at a club to account and to discuss the strategic direction of the club, but the Rovers Trust believes there has been a substantive failure to do this at BRFC.

Michael added: “I am sure our feedback will contribute to the forthcoming review of the Structured Dialogue process.

“And we have been invited back to meet the Sports Minister after the General Election to continue this dialogue.”

Michael used the meeting, facilitated by Kate Hollern, MP for Blackburn, to check on the progress of reforms to the insolvency process that would make it easier for a supporters’ trust to mount a rescue bid when a club goes into administration.

This is a very real possibility at Blackburn Rovers, particularly if the club is relegated this week.

The Minister reported that the reforms are progressing and the football authorities are charged with implementing them.

Michael says: “My feeling is that, post-election, there will be a renewed focus on these reforms. They may end up being some of the most valuable changes for Rovers Trust and the long-term future of our football club.”

Michael and the Minister proceeded to discuss the wider issue of football governance reform. The Minister explained that the Owners & Directors Test (formerly the ‘fit and proper test’) had been harmonised across football and that it had to be applied in an objective way.

“She was interested in our position on the Test - that it’s merely a gatekeeper test to stop convicted criminals and bankrupts from buying football clubs.

“There is, sadly, no realistic reform of the Test that could assist clubs in the situation of Blackburn Rovers so attention needs to shift to proposals that seek ongoing regulation of current owners to try to ensure they act as stewards of the hugely important social and cultural institutions that are our football clubs,” Michael argued.

“In practical terms, we support an ongoing annual licensing scheme for professional football clubs, backed up by flexible and proportionate governance rules,” he said.

Kate Hollern, who has been very helpful in lobbying for change in the governance of football and attempting to safeguard the future of Blackburn Rovers, had already outlined to the Minister the economic impact of the decline of Rovers on the town of Blackburn (the Rovers Trust also thanks Graham Jones MP and Jake Berry MP for their interest and support).

The realistic goals for the Ministerial meeting were to:

Michael says: “On these terms the meeting exceeding my expectations. The Minister took a keen interest in our situation and is listening closely to ideas on extended and ongoing regulation of football ownership.

“Most encouragingly, this is the start not the end of this dialogue. On the basis of this meeting, the Rovers Trust has an invitation from the Department of Culture, Media and Sport to return after the election.”

As a valued Trust member, please feel free to contact Michael Doherty about this meeting or any policy issues on michael.doherty@roverstrust.co.uk