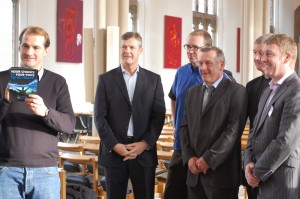 After the event, Jake Berry MP for Darwen signs up to the trust.

Rovers Trust, the official Blackburn Rovers supporters group, has officially been launched with a presentation to fans at Blackburn Cathedral.

Over the course of the morning, up to 100 supporters turned up for all or some of the event as a mixture of financial experts, former players and fellow supporters discussed at length the Trust’s visions and aims.

Trust co-chairman Wayne Wild said to BBC Radio Lancashire: “We had a lot of important people at the meeting including the Mayor and Jake Berry, a local MP. Everything went really well, including our two-hour presentation and Q&A.

“We managed to get quite a few new members signed up which obviously is great, but there is still much more work to do.

“We are here for the long-term and it is not just about the here and now, it is about protecting the assets and benefits which mean so much to so many people.

“As the Trust, we aim to help the club and whether that is through co-ownership or by taking it on from the owners, we need to be in a position to do that. We need to be thinking of 100 years from now and not 10 minutes.”

Supporters heard plans of how the Rovers Trust aims to obtain full, or part, ownership of the football club by getting fans to buy shares in the Trust, an initiative which has already raised almost £3 million in pledges to date. 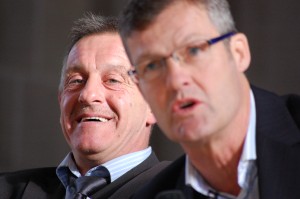 Former Rovers defender Glenn Keeley, who attended the launch, also spoke to BBC Radio Lancashire. He said: “The Trust has to stay strong and united in order to form a fallback for the club, although things look a lot calmer at present.

“It is 100% a possibility that Blackburn Rovers could be a community owned club but the only problem is raising the sort of money that you need to be successful in the modern game.”

“It is a very unsure situation at the club and for me, I see the Trust as the best way that  the club can go forward in the future. I don’t think it is about the amount of money that people invest, it is about how they support the football club.”

Rovers Trust is now looking for more supporters to join their growing membership with the eventual goal of running the club as a ‘community, fans-owned club’.

Fans are being encouraged to become members of the Rovers Trust at just £10 per year (£5 for juniors) to gain full voting rights and a say in the direction Rovers Trust takes in its bid to take control of Blackburn Rovers.

To become a member of Rovers Trust, please sign up here.