The Rovers Trust, the official supporters trust for Blackburn Rovers, has succeeded in legally protecting Ewood Park as an ‘Asset of Community Value.’

The Trust is one of the first in the country to take advantage of a relatively new Act of Parliament allowing football stadia to be recognised as significant to the town and community and adds safeguards for supporters should any attempt be made to sell the ground.

The listing of Ewood Park, home of Blackburn Rovers since 1890, has been formalised by Blackburn with Darwen Council under the Localism Act 2011. One of its provisions requires the owners of Blackburn Rovers to inform the council and the Rovers Trust if the ground is to be offered for sale.

This is one of the many important initiatives the Rovers Trust is successfully working on for members and the supporter base as a whole. Membership is just £10 per year and the funds are vital to the volunteers running the Trust to continue work such as this.

Paul Brooking, executive officer at the Rovers Trust, compiled the nomination and said: “We are delighted the council agrees with us that Ewood Park holds a special place in the local community and with the people of East Lancashire. 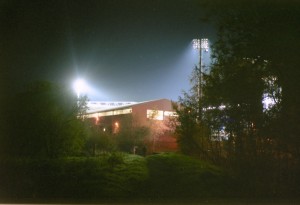 “Dating back more than 120 years the famous old ground has been built, rebuilt and built again under the stewardship of several philanthropic and far-sighted owners, most recently by Jack Walker.

“Blackburn Rovers fans will welcome this protection of the ground Jack Walker built for the team and for the supporters.

“Ewood Park should continue to be the home of Blackburn Rovers for many generations to come.”

Ewood Park was officially opened in September 1890 with a match against Accrington with 10,000 spectators attending. The ground staged an international match between England and Scotland as early as April 1891.

Paul added: “We would like to thank Blackburn with Darwen Council for the support they have shown to our nomination. “Under the Asset of Community Value status there is now a legal obligation to allow the Rovers Trust a six month period in which to prepare and submit a bid to purchase Ewood Park.

“There is no obligation for the owners to accept such a bid but this listing does provide the Trust with time to enter the process.

“The successful listing with the council provides a significant opportunity for the local community to purchase and take control of Ewood Park should it ever be offered for sale by the owners.”

Rovers Trust has the full approval of Supporters Direct, which enables the involvement of supporters in the ownership and running of their football clubs.

The Trust is being run as a Community Benefit Society. Fans have been encouraged to become members of Rovers Trust at just £10 per year (£5 for juniors) to have a say in the direction Rovers Trust takes in its bid to take control of Blackburn Rovers.

For more information, to become a member and to make a pledge of financial support please visit www.roverstrust.co.uk. The website also has full details of the Trust’s forthcoming AGM on Monday October 21.