Home / News / Fans unite under ‘We Are Rovers’ banner

The four leading fans groups of Blackburn Rovers have joined forces creating a call to action under the banner ‘We Are Rovers’ dedicated to pressuring the owners to sell the club. 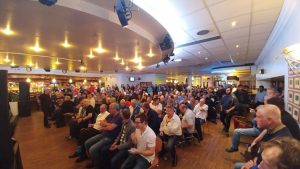 We Are Rovers does not claim to represent all Rovers supporters and does not constitute a task force or other unelected body.

We will be organising campaigns which will be open and inclusive to anyone who wishes to participate in them.

Rovers legend Simon Garner has agreed to be the supporters’ ambassador and will act as a spokesman for We Are Rovers.

We Are Rovers has two core objectives:

We Are Rovers will campaign everywhere to highlight the disastrous ownership of Blackburn Rovers by the Rao family, based in Pune in India.

Respectful, peaceful and professional protests will take place at Ewood Park on selected matchdays alongside a high profile PR campaign against the Venky’s, the company which ultimately owns Rovers, in its backyard in Pune.

We Are Rovers has been formed after the Rovers Trust balloted members to ask for a significant change in its approach – from seeking meaningful dialogue with the owners to help them understand Rovers and the supporters better, to a demand they put the club up for immediate public sale.

Members agreed with a 97% mandate. BRFCAG followed up with a similar ballot of members to back the Trust and this was also close to unanimous.

Simon Garner, Blackburn Rovers’ all-time record goal scorer, said: “I have supported Rovers fans in their efforts to take back control of the club for five years and the We Are Rovers initiative is a very welcome step up in the fight to change ownership.

“Like most fans, I have had to watch appalled at what has happened to Blackburn Rovers. Equally bad is the impact terrible ownership has had on the team, the community and on the supporters.

“I will be fully behind We Are Rovers as we seek to further highlight the actions that have brought our once proud club to its knees.

“For the sake of everyone concerned about this famous old club, we need the Rao family to hear the message in Blackburn and in India: Do the decent thing and sell Blackburn Rovers now!”

As a distinguished former player in the pre Jack Walker days, Simon knows how it is when there are little funds for team-building and managers have to make do.

He said: “We Are Rovers is not about the manager, the team or the league position. It’s not even about the few remaining administrators left at Ewood Park who are trying to run a football club in appalling circumstances.

“Owning and working for a football club; playing for and supporting the team, should be a joy and a privilege - it certainly was when I pulled on that famous blue and white jersey.

“But the pride and the fun have been driven out of the club. The fans’ passion will never be removed though and that’s what is driving We Are Rovers.”

Since the public meeting, media coverage of the crisis at Ewood Park and the fans’ determination to put an end to the Rao family’s reign has been widespread and positive.

Under the headline, “Venky’s and other corporate vandals must be stopped from owning clubs”, Oliver Kay, chief football correspondent, wrote in The Times at the weekend:

“It is an appalling mess, a serious threat to the future of a proud, historic club who were one of the Football League’s founder members in 1888, won the Premier League title under Jack Walker’s beneficent ownership in 1995 and were, for a time in the last decade, an example to all those provincial clubs who seek to balance realism with ambition in the bid to stay afloat in the top flight.”

In depth media coverage in India – in the hugely respected Times of India and in the New Indian Express – are beginning to hit home in the Rao family’s backyard.

We Are Rovers says: “It’s a welcome sign that, though the owners may be 6,000 miles from Ewood Park, we can still take up our grievances with them in their homeland.

“There is a real appetite among journalists and the media in India to understand and report on what has happened to Blackburn Rovers.

“We are receiving a lot of requests for information and interviews and we are very happy to fulfil all these requests as we step up the campaign for new ownership.”

To find out more about We Are Rovers and how all supporters can play their part, please visit: