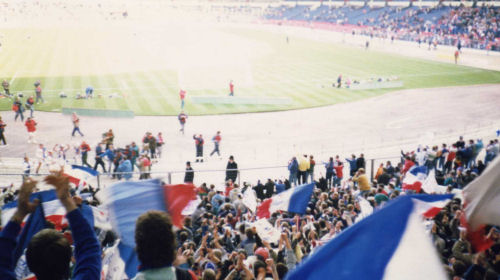 Ten years ago Charlton Athletic and Blackburn Rovers were playing each other in the Premier League. A crowd of 23,423 were at The Valley to see Charlton win 1-0 in December 2006 and there were nearly 25,000 to see Blackburn take their 4-1 revenge at Ewood Park the following April.

Next Saturday the teams meet at Ewood Park in a League One fixture. The attendance might just reach 10,000.

Both clubs have spent most of their post-war years at the second (Championship) level of English football and this might reasonably be described as their natural level. But both have also feasted at the top table in recent years. Blackburn Rovers, propelled by the backing of Jack Walker, enjoyed eighteen seasons in the Premier League and were famously champions in 1994/5. Charlton, cobbling money together from whatever sources they could find, had seven seasons at the top table and were proud to finish seventh in 2004. During these years both clubs developed significant infrastructures - impressive stadiums, lucrative sponsorship and databases bulging with supporters.

So why is it that they are both now competing against clubs like Fleetwood Town and AFC Wimbledon whose resources are miniscule in comparison?

The answer lies in incompetence, arrogance, instability and absence.

Fleetwood’s owner Andy Pilley is a long-term resident of the North West who has owned the club since 2004. He can usually be found after the game in the social club at the ground. Wimbledon are a fan-owned club whose unpaid Chief Executive Erik Samuelson has guided them from non-league since 2001. Both men are central to the operations of their club and fully appreciate their cultures and traditions. Both make themselves available to supporters.

Charlton and Blackburn supporters have by comparison seen their owners (Roland Duchatelet and Venkys) blunder in to their clubs, refuse to listen or pay any respect, make astonishingly inept appointments and decisions and, perhaps most importantly, disappear from view.

A football club owner does not need to be physically present at the club. Francesco Bechetti had a high profile at Leyton Orient whereas new owner Nigel Travis is based in the US.   But if the owner is not going to be visible he or she had better make sure that local management is top class and that first rate communication with supporters is a high priority. It is vital they appoint someone to represent them who will be able not only to speak authoritatively and wisely, but also to listen perceptively. Someone who will be able to build links in the community, who will be responsive and will retain the trust of supporters through the inevitable ups and downs on the pitch.

Because, if the owner is too far away or too busy with their other businesses (as Duchatelet and Venkys seem to be), they run the massive risk that supporter morale will be trashed. This initially provokes anger and protest but eventually it leads to dismay and apathy. People find other things to do. They go and watch more locally-rooted (perhaps non-league) teams.   Or they go shopping. There is a widening detachment between owner and fans who think “If he doesn’t care, why should I?” Attendances dwindle and the atmosphere declines. It is a slippery slope.

CAS Trust and Rovers Trust believe passionately that football clubs must be an integral part of their communities; that local people should be able to feel pride in their club whatever is happening on the pitch; that an affinity should be built and maintained which enriches both parties.

Venkys and Duchatelet have signally failed to achieve this and that is why both supporter organisations join together today to call on their respective owners to acknowledge that the time has come to move on and to hand the club over to someone who will put not only their money but also their heart and soul into the club. We don’t have delusions of grandeur or unrealistic expectations. We just want our clubs to be owned by ambitious people who respect our histories, cherish our traditions, relate to our communities and include our supporters.