The Rovers Trust AGM was held on Tuesday 20th July in Billington. It was attended by 16 Members plus 3 Non-Members, and around 20 Apologies for absence. The Guest was Graham Jones, formerly MP for Hyndburn, who spoke after the formal procedures and was awarded Honorary Membership for his sterling work in the Commons during the 2010s. 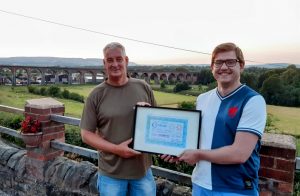 John Murray, retiring Chair of the Trust was re-elected along with 3 new Board members: Andy Young-who composed the recent submission to the Fan-Led Review; Duncan Miller –in the first few years of the Trust was a serving Officer; and Michael Ellison –until recently Trust Secretary. Robin Sparkes becomes the new Trust Secretary. Thanks were given specifically to Ozz Jones, Board member standing down and one of the Founders of the Rovers Trust.

The Chair covered the last 2 years in his summary of a very disjointed and problematic period.

The Trust had questioned the strategy behind the sale of 50% of the Training Centre; it had sent out 9 Newsletters but only met 6 times due to the pandemic (only 4 officially quorate!); had a very positive response to the Submission to Tracey Crouch MP’s Group (see Trust web-site for both); had developed a Marketing Prospectus back in February 2020 to ‘win back the fans’ but this had been largely ignored and now was worried about not only the massive reduction in Season-ticket holders but also the lack of communication to previous Season-ticket holders and the Database of Supporters. The Rovers and Venkys London Ltd debts were rising; no perceptible joined-up decision making and certainly not even a medium-term strategy; with the silence from Pune it was a worrying situation.

The Trust would be looking to propose a second ACV for Brockhall; to put forward again its Marketing Prospectus (see web-site for details) and develop the Heritage Agenda around the theme of “THE ORIGINAL TOWN TEAM”.

Because of Owner silence the Club is drifting and however much the Trust pushes for Communication we are just met by silence. The decline of our Club must be halted with a more aggressive, pro-active and listening approach.

The discussions at the AGM, and in response to Graham Jones’s comments about lack of atmosphere both inside and outside the Ground led to a number of suggestions around the walk to the Ground; Safe Standing; Food offer outside the Ground; a more family feel to both home and away matches; attracting Asian-heritage supporters; and using Ewood Park more as a Community Asset during the week and weekends.

And the Trust needs 1000 Members (currently 645), supported by a team of volunteers and staff to increase the Trust’s voice and credibility by the end of Season 2021/22. Finally the Trust needs to actively talk to Pledgers, London and Overseas Supporters and try to recreate the RALLY ROUND THE ROVERS atmosphere of the mid-1970s. Maybe despite or in spite of the Club!

We want OUR Club in safe hands and to celebrate the Rovers’ 150th Anniversary in 2025 as Lancashire’s Premier Team again.

Thanks again to Graham Jones for his stimulating and encouraging support for the Trust and our Club.